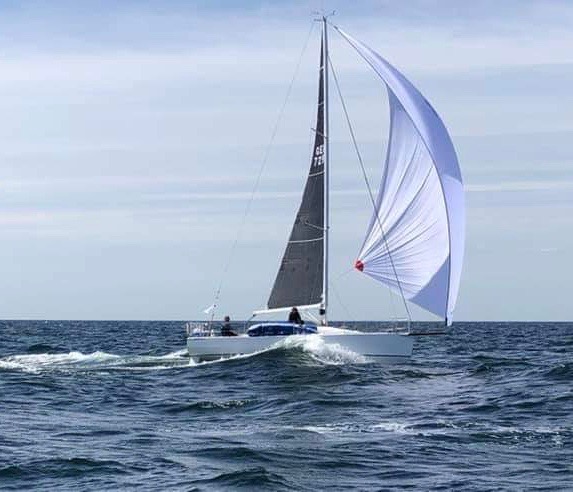 « Baltic 500! Racing in Corona Times with the JPK 10.10 HINDEN. Probably as the only regatta in the world at the moment the Baltic 500 double hand race started on May 21st 2020.
After the organizers have really done everything to get the necessary permits. The race starts and ends in Strande at the north west end of Kiel Bay. The course takes the teams on a round about 500 nautical miles long route past Fehmarn and Copenhagen to Laesoe a small island on the height of Gothenburg. It goes back through the Great Belt and east past Langeland to Strande. The first part was a long up wind leg almost up to the Darß at 10 to 12 kn wind. The wind forecasts were not quite correct for the first 10 hours so we were forced to pass Fehmarn south after the south wind shift came a little earlier than expected. We caught the second south wind shift perfectly and were the first ship tacking east.
So we were able to keep the distance to the 10.80 Frida and Milou relatively small and the First 36.7 semi-dry did not escape us either. After about 17 hours we had reached the east end of the exclusion zone around the fairway between Fehmarn and Denmark and were able to turn north to an almost 180 degree vmg down wind up to laesoe. The wind started at around 15 to 20 kn. By the time we reached Öresund the gusts were already at 30 kn and we had switched from our A2 to our A4.5. jibing up the entire Øresund at 30 kn of wind between Sweden and Denmark and the fairway was really hard work and there was not much time to rest. In the meantime we received a storm warning for the second night.
We should prepare for gusts of up to 50 kn with the passage of a cold front. So at the exit of the Oeresund we decided to put down the gennaker for the jib when the gusts reached 37 kn to be able to eat something. Only with jib and main we still made a good 10 kn speed and our vmg was almost the same as with gennaker. Quite frustrating since we had worked very hard all day. Surprisingly the wind dropped and we had to set up the A4, 5 again.
Shortly before Anholt at around 9 p.m. the gusts was again up to 36 kn and we packed the A 4,5 down. The passage of the cold front was announced for about 11 p.m. With the last light we put in a reff and prepared for a hard night. We decided to go to the swedish side because the wind should last longer there. We wanted to reach Laesoe before the wind drop behind the cold front. And then it got dark and very cold. Despite my four layers under my dry suit, i got very cold. The rain started and the waves got bigger. With 15 to 16 kn of speed we shot the waves down into the black night. Fortunately, the gusts did not exceed 40 kn. Around 3 am I had my low point at about this time, we had to cross the fairway again and of course there were at least five container ships we had to leave space. Till had some power left to give me a 20 minutes rest to prevent me getting seasick.
Shortly afterwards with the first daylight the cold front had past and the wind decreased significantly and turned from SSE to SSW. We reached Laesoe at about 6 am. After 41 hours we rounded Laesoe to go back on a very long upwind leg. We first sailed west directly under the danish mainland before we tacked south to escape the old wave. There is also a counter current that I discovered on our last summer vacation. The wind started again at about 10 kn from SSW and should increase later with a west turn. That was a good thing, because the first 36.7 was only a few miles behind us. And the only chance to control them on an up wind leg was more wind. During the day the wind got up again to a good 25 kn and with the west turn we could loosen the sheets a little with a TWA between 55 and 40 degrees we went towards the Big Belt. The wind stayed stable during the night and so we could continue on port tack through the Big Belt and past Langeland. In the early morning hours we reached the southern tip of Langeland. Shortly before we left the land cover we switched to the haevy jib because the wind should continue to increase. We had finally caught up with one of the two new Dehler 30 OD that started 30 minutes before us.
Since another west turn was announced during the morning, we first tacked west after Langeland. In order to cover the first 36.7 which was still chasing us, we tacked back south a bit earlier than the Dehler. Otherwise we even could have overtaken the Dehler before the finish. With about 30 kn of wind and a lot of waves we passed the finish line after about 70 hours. Very happy to have kept the first 36.7 at a distance and not to let the two 10.80s Milou and Frida escape too far. Like last year, we were able to achieve the overall victory. And beat at least one of the two Dehler 30 OD sailed. The two Dehlers sailed without rating.

Again the 10.10 performed very well and nothing was damaged. Thank you very much JPK.